The Meeting of Young Researchers in Structural Computational Biology (EJIBCE) aims at bringing together the Portuguese scientific community working in the field in a free-of-charge meeting, to provide a forum for discussion and sharing with no strings attached. This third edition builds on the success of previous editions in Porto, Lisbon, Coimbra and Oeiras, which gathered ca. 60 participants and had over 10 oral communications in each edition.

Given the current economic situation in Europe, and particulaly in Portugal, it is increasingly harder to obtain funding and have an optimistic approach to science and collaborations. Besides, the recent austerity measures put in place by the Portuguese government led many researchers to join groups and institutes abroad, and eventually lose touch with the Portuguese scientific community and developments.

After obtaining a doctoral degree or finishing a postdoctoral appointment, many Portuguese scientists abroad look back to their country looking for an opportunity to continue their careers and contribute to the development of Portuguese science. Others wish to remain abroad, but at the same time reach out to the Portuguese community and cultivate stronger ties to its researchers. However, what groups are there on Computational Structural Biology? What do they actually focus on? Are they open to collaborations?

This meeting was created in order to answer these and other similar questions. Its main goal is to provide a simple no-frills environment where Portuguese researchers in Computational Structural Biology, active both in Portugal and abroad, can meet and get to know each other’s research and ambitions. Ultimately, we hope that in doing so, we will be able to stimulate new collaborations and broaden the horizons of the Portuguese community of Computational Structural Biologists.

EJIBCE 2017 builds up on the format of previous editions, focusing on a small number of oral communications interspersed with several breaks to encourage discussion and exchange of ideas. Throughout the day, 11 researchers will present their results. Seven will be selected from the submitted abstracts by the Scientific Committee, based on the quality and originality of the work, and will be given 15 minutes to speak, followed by a short discussion. The remaining 4 oral communications will be delivered by invited keynotes, who will be given 30 minutes to speak plus 10 for discussion. The program is available as a Google Calendar here.

This year’s edition will take place in Coimbra, at University of Coimbra Physic’s Department.

João Ribeiro received his diploma degree in Bioinformatics in 2009 from the Faculty of Biotechnology, Portuguese Catholic University, and his Ph.D. in Sustainable Chemistry in 2014 from the Faculty of Science, the Faculty of Pharmacy and the Institute of Biomedical Sciences Abel Salazar of University of Porto in association with the Nova Lisboa University, advised by Prof. Maria J. Ramos. During his Bioinformatics degree, he had the opportunity to combine Biology and Biochemistry with software development to produce user-friendly Bioinformatics tools. The pursuit for the integration of Biochemistry and software development followed João to his Ph.D studies, where he developed third-party tools (plugins) for the widely used molecular visualization program VMD, developed by Klaus Schulten’s Theoretical and Computational Biophysics (TCB) group. These plugins aimed to assist non-expert users of Computational Chemistry software at different stages of the computer-aided drug design process, such as molecular docking, protein mutagenesis and molecular dynamics simulation analysis. João joined the TCB group in 2014 to employ molecular dynamics simulation to study the cellulose degradation process for biofuel production while keeping the software development always present in his work. He is currently the main developer of the newest VMD plugin to assist MD novice users in the preparation, execution and analysis of MD simulations, QwikMD. This plugin smooths the initial learning curve imposed by the MD programs and allows more advanced users to speed-up tedious structure preparation procedures.

João M. Damas is a biochemist from background (Universidade de Lisboa, 2007) that decided to follow computational molecular biophysics. During more than eight years he was a researcher in the Protein Modelling laboratory (www.itqb.unl.pt/pm), under the supervision of Prof. Cláudio M. Soares, where he specialized in molecular dynamics and related techniques and applying them to understanding biomolecules at the molecular level. One year and a half ago, João joined Acellera Ltd. (www.acellera.com), a company focused on software and hardware solutions for computerized drug discovery, where he is a Researcher and Software Developer. He is one of the main developers and maintainers of HTMD, a Python package to prepare, handle, simulate, visualize and analyze molecular systems, as well as of other Acellera software, such as ACEMD, AceCloud, and AceFlow. 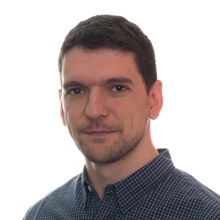 António Ribeiro is a postdoctoral researcher in bioinformatics and computational chemistry at the European Bioinformatics Institute (EBI), in Cambridge. António finished his biochemistry master’s degree in 2009 at the Faculty of Sciences of the University of Porto. His master thesis was developed in the computational biochemistry group under the supervision of Professors Maria João Ramos and Pedro Fernandes, and focused on the application of computational methods (QM and QM/MM) to study chemical and enzymatic reactions. His PhD thesis, finished in 2013, was done in part at the same group, but also at the University of Calabria, with Professor Nino Russo. The thesis described the computational study of the catalytic mechanism of several enzymes, namely HIV-1 Integrase and Protein Phosphatase 5. After the PhD, António used other computational methods like virtual screening and free energy calculations to identify potential hit compounds for HIV-1 Integrase. Since June, 2016, he is part of Professor Janet Thornton’s group at the EBI, where he is developing a database of enzyme mechanisms and catalytic sites. This database (https://www.ebi.ac.uk/thornton-srv/m-csa/) will be used to understand enzymatic function and enzyme evolution.

João M. Martins graduated with a Bachelor’s degree in Chemistry with the University of Porto in 2011, having started his work in computational structural biology during his undergraduate studies. He later obtained the degree of master in Chemistry from the same university, researching quantum chemistry and theoretical structural biology during his Master’s thesis work. Working under Prof. Kresten Lindorff-Larsen, he obtained the PhD degree in Biochemistry in 2017 with the Structural Biology and NMR lab (SBiNLab) of the University of Copenhagen. His work has been focused on protein-protein interfaces, hotspot theory and small molecule docking under the supervision of Irina Moreira while at the University of Porto and mutation studies through free energy perturbation and integration of experimental data in protein simulation. Currently, he works as a postdoctoral research scientist at the The Image Section of the University of Copenhagen computer science department. His research focuses on protein structure and function studies through machine learning and neural networks’ methods.

All materials and services on this website are provided without warranties. The content published in these pages may contain errors for which the organization assumes no liability or responsibility. The content is also subject to periodic changes without the duty of notice. Any doubts and questions should be addressed to the organization by email (ejibce@biosim.pt). Registration to this event implies acceptance of these conditions.